Careful analysis of the paintwork on the Govan road gate to Elder Park has revealed the original colour, a burgundy red. Referring to an early postcard it can also be assumed that this same red was used as a decorative element on the  missing Elder Park Bandstand.

Retaining as much of the original style and character of the gates as possible is an important element of this improvement project. With no coloured images of the entranceway to refer to,  a sample was inspected by a specialist conservation surveyor who was able to identify the many layers of paint which have adorned the gates since they were first opened in 1885. You can see these in the image. These include layers of lead-based paint,  and the “corporation” green which was used widely throughout the city because of its affordability.

The red paint will be featured on the gates and also on the railings immediately next to the gates. The lamps will be black. 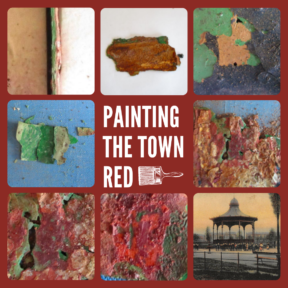