The regeneration of Govan received a tremendous boost today (22 September) with the news that Glasgow City Council’s Executive Committee gave authority to move on to the second stage of the Govan Townscape Heritage Initiative (THI) project.  This next stage will bring in an estimated investment of £6.8million to the local area.

The THI project aims to breathe new life and prosperity into Govan by improving the condition and attractiveness of the built historic environment, encouraging more business, retail and visitor opportunities and promoting the exceptional heritage that makes Govan unique. By investing to make the very best of the area’s significant heritage assets, the THI aims to restore Govan’s status as a vibrant riverside community helping to improve the quality of life and prospects for everyone in Govan whilst also boosting the city’s economic and social vitality.

The second phase of the community-led THI project, which will be implemented over five years from 2016 to 2021, will deliver an exciting range of investment designed to improve the attractiveness and character of Govan’s traditional buildings, shopfronts and streets; bring vacant historic floorspace back into productive use; and inspire local people to learn about Govan’s heritage and develop new skills.

Funds to establish Govan Old and the Govan Stones Collection as an important Glasgow cultural attraction form the core of the THI plans. THI investment will help repair the church building and develop new income-generating business and event space that will financially sustain the proposed visitor centre in the long term. The Govan Old development plans, of which the THI is the first of many planned investment packages, aim to realise the transformational potential of Govan Old, promoting Govan as a new cultural destination on Glasgow’s riverside, addressing past reputational damage and bringing fresh social and economic activity to a location where it was previously absent.

Signature historic buildings including the Govan & Linthouse Church Ancillary Building at Govan Cross, B-listed tenement at 883 Govan Road and the Pearce Institute, as well as the tenements that make up the core of Govan Conservation Area, will be brought back into good condition with THI Building Repair Grant for property owners.

The traditional shops that were once Govan’s thriving retail centre will also be overhauled to create attractive streets with real kerb appeal. A Shopfront Improvement Grant Scheme will be offered to property owners to transform the run-down, roller shuttered exteriors of 45 shopfronts, helping to improve the shopping environment and stimulate greater retail opportunities and more customers in the town centre.

Govan’s streets and public spaces will continue to be improved. Authentic natural stone pavement finishes will be re-instated outside the Pearce Institute and entranceway to Govan Old. The missing cast-iron gates and lighting main entrance way to Elder Park will be restored as will the K13 and Govan War Memorials.

Physical improvements will be matched with economic development interventions to improve the commercial and retail offer of the town centre.  The proposals, which are currently being developed with the local community as a Vibrant Town Centre Vision and Strategy, will return long-term vacant buildings and shops to employment generating uses.  This is expected to capitalise on the improved footfall and connectivity expected from the proposed new pedestrian and cycle bridge linking Govan and Partick to boost community vitality and local job prospects.

A wide range of community engagement projects are also planned to celebrate and raise awareness of Govan’s heritage and to introduce traditional construction and craft skills to a whole new generation.  New signs and installations depicting Govan’s ancient and 19th century shipbuilding history are planned for visitors and locals at Govan Cross and along the new riverside walkway from the ferry terminal at Water Row to Govan Old.  Opportunities to get involved in heritage talks and trails, making ceramic tiles, or trying traditional sign writing or stone carving, are just some of the activities being offered by the TH programme to lift the area’s reputation and create a feel good factor for locals.

Training programmes are also planned to foster a greater appreciation of Govan’s historic built environment and to develop the traditional construction skills and knowledge required to protect Govan’s Conservation Area for future generations to enjoy.  This includes using the THI Building Repair and Shopfront Improvement contracts to target job opportunities and apprenticeships in the traditional construction sector for local people.

Govan is perhaps the most historically significant place in Glasgow.  Predating the city, Govan’s rich roots stretch back to ancient times when it was thought to be the religious and political centre of the then Kingdom of Strathclyde – shown in the outstanding collection of ancient burial stones found at Govan Old, whose promotion features prominently in the THI Project.  In the 19th century, Govan became the acclaimed pinnacle of the world’s shipbuilding industry, quite simply building the fastest, finest and greatest numbers of ships anywhere in the world.  The prosperity of both these eras left a cultural and architectural legacy in Govan and the THI Project aims to use this to forge a positive identity and renewed vitality for this riverside community that was once the engine room of the second city of British Empire.

The Heritage Lottery and Historic Environment Scotland funding will be matched with £1.3million Glasgow City Council Funds to create a grant funding pot that, with property owners’ contributions, will result in nearly £5.5million of investment to improve the attractiveness and prosperity of Govan as a historic place of great distinction.

This new grant award marks the second phase of regeneration investment in Govan. It will build on the £90million improvements already achieved by the award-winning Central Govan Action Plan and Govan Cross Townscape Heritage Initiative Phase 1 between 2006 – 2015, which are widely acknowledged to be bringing real and lasting change to Govan.

Councillor Frank McAveety, Leader of Glasgow City Council, said: “I am delighted to see the next steps in the regeneration of Govan being taken.  We are very grateful for the support of our funding partners Historic Environment Scotland and the Heritage Lottery Fund.  This support will allow us to work with partner organisations in Govan to use the area’s fantastic cultural and industrial heritage to continue and complete the regeneration the area has seen in recent years.  With City Deal funding also coming to help transform the area, the future is bright for Govan.”

Martin Fairley, Head of Grants for Historic Environment Scotland, said: “We were pleased to award funding to this project, which aligns well with the economic and regeneration priorities of our CARS programme, and builds on other successes in the area including the Orkney Street Police Station, Pearce Institute and Fairfield Shipyard Offices. We look forward to seeing how Glasgow City Council use this money to continue the regeneration of Govan, providing improved community spaces and venues, additional office accommodation and a more attractive centre for local people and visitors to spend time in.”

Lucy Casot, Head of the Heritage Lottery Fund in Scotland, said: “Thanks to National Lottery players, this Townscape Heritage initiative will build on the momentum created by the first phase of Govan’s regeneration. The restoration of more key historic buildings in the town centre will boost both the local business and tourist economy, while instilling an even greater sense of pride amongst the people who call Govan home.”

The success of the first phase of the Govan THI was recognised in 2014 by the award of the Silver Jubilee Cup, the UK’s foremost planning accolade, by the Royal Town Planning Institute.  Notable achievements during this period include the restoration of six listed buildings / structures and nine shopfronts; the repair and upgrade of public realm at Govan Cross; the re-use of community space in the Pearce Institute; and involving over 3,000 people in learning and training projects. 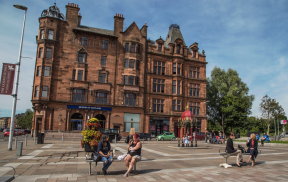 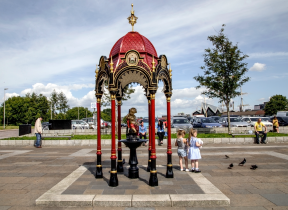 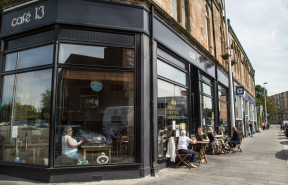 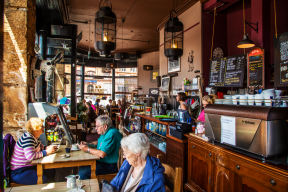 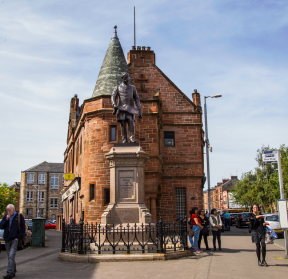